skip to main | skip to sidebar

Turned in my key 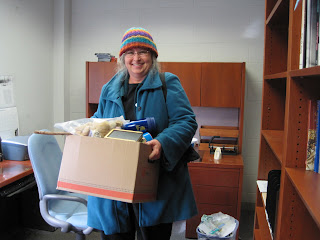 Yesteday was to be the last day at the office. Not the last day of work, since grades are not due until Monday and I have a student with a good excuse who still owes me work. But the day that I clean out my office and turn in my key and ID and close that chapter.

I planned to get there 7:30 or so and be out by noon. But I woke up at 2:30 am and could not go back to sleep. Was I nervous, excited, just too much coffee the day before? Whatever the cause, by 4:00 I called it a night and got up and went in to work. I had to get a special buzz in from security, and found out who else is in the building at that hour (my IT pal who likes to get in early on Friday to be home in time for the Sabbath) and what it's like to see a Gallaudet sunrise.

I cleaned out my desk, gave away office supplies to whoever stopped by, and left far too many mixed up pens and pencils in a bag in the supply cabinet. (Sorry - just toss 'em if nobody wants them.) I took the decorations off my door. 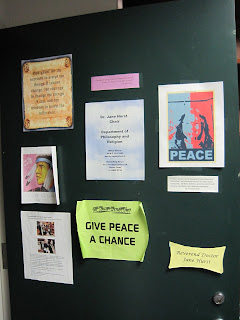 The door has always been a place for the quirky and wild and wonderful things that come my way. A former student even wrote a poem about its crazy juxtapositions in the eighties. This final incarnation had a picture of President Obama in Crow regalia after he was adopted into that tribe, a quote from Pat Robertson against feminism, a picture of a Zen monk and his dog in similar prayer positions, the Serenity Prayer, a quote by Groucho Marx from the Bunch of Grapes Bookstore that says "Outside of a dog a book is a man's best friend. Inside of a dog it's too dark to read." and a sign saying "Give Peace A Chance" from the protest one freezing January day before the invasion of Iraq, among other things. Sad it see it all go, and wondering where I will be able to express that "look at what I discovered" wonder - oh, it's this blog. I will miss having a door as my canvas, though.

Near the end of the morning, I started to feel it a bit. Rebecca stopped by and we did the Medicine Cards - we pulled out the Hawk, for keen observation, and the Otter for playfulness. Go play! she said. Let's see if the obligation to work leaves me and I can really relax. Let's see.

I always wanted to leave the office with one box, like they do on TV when someone gets fired. Fraudulent, because I have brought home tons of books, filled all the empty shelves and have to do another book purge to make room for everything. But I liked the image. It's the one you see at the top of this post, with a few books left behind for my department.

What is that stick? you might ask. It is a stick from a tree hit by lightning on the campus 15 years ago. Who knows when you might need something like that. or the Tibetan incense or the rainbow leis in case of a rainbow emergency. Or the little spindle that spins tiny yarn so that I could demonstrate it to my classes. Spinning being a major cultural metaphor that shows up in lots of myths and stories.

I turned in my key and my ID to Susan, and there was a pang of regret at leaving all these people I have enjoyed working with. Our little corner of the University has been such a positive place, such a haven from political nuttiness, and I will miss it terribly, but time to move on to what's next.

I made myself walk out to the car, stow "the box" and start to drive. An odd thing happened at this point. I passed across the slightly hazardous bridge over the railroad tracks (they are replacing it with something that looks really substantial) and when I got to the other side I felt a release. Something has changed, and I felt it at the at moment even more than saying goodbye to friends and being "locked out" of my old life.

That night it started snowing, and it's up to 13 inches by now. It's expected to reach 20" by the time it stops tomorrow morning. I'm not going anywhere for a while and that's fine. A little midwinter silence is a good way to prepare for my future.
Posted by Jane at 2:08 PM

Jane
A lifelong student, teacher, fiber and bead artist, musician, and writer,I now find my bliss singing in choirs and volunteering in a hospice. And petting my dog.